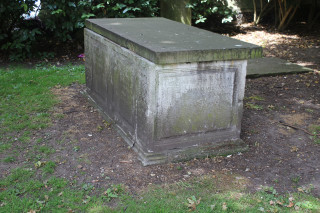 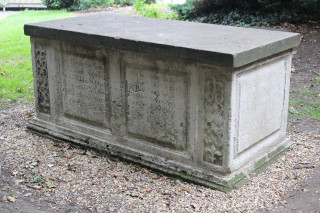 This tomb stands in an important part of the churchyard, close to the east end of the church and the high alter. The Finch family had lived at Red Heath near Croxley Green since 1663 when they acquired the estate through marriage. By the 18th century, when this tomb was built, one branch of the family lived in Watford at Frogmore House on the Lower High Street.

The first Finch to be buried here was Isaac senior who lived to an extremely impressive 104 years of age. At the time of his death he was described in the Gentleman’s Magazine as having ‘followed the trade of Leatherseller for 80 years’.

Buried with him are his wife and their son, Isaac Junior and their daughter-in-law, plus their nephew, John Shipton together with his wife also. These burials span the years 1725 – 1761 which makes them amongst the earliest of all the tombs. Next to the tomb is a grave stone, now laid flat, which records the death of another member of the Shipton family, Mary, who had married T.T.Brown of Calcutta, demonstrating further connections within Watford to the East India Company.