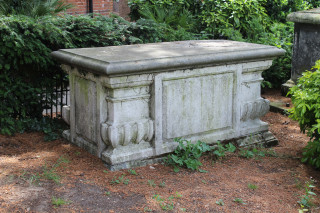 There were Deacons living at Wiggenhall in Watford for generations. The first-born son was always named Thomas and if he died for any reason the next born son would then be named Thomas and so on. This practice was not uncommon during this period, but it can make tracing families histories a bit of a challenge.

One of these Thomas’, or Tommy, gave his name to Deacon’s Hill in Watford. In times when it was merely a cart track leading from Watford to Wiggenhall and up the hill to Oxhey, it was known as Tommy Deacon’s Hill.

There were several branches of the family in Watford and at one time there were three chest tombs in the churchyard. There are no Thomas’ buried in this particular tomb, however there are three Catherine’s two of whom married men from London and little Catherine who died aged 7 months.