The Legend of Fig Tree Tomb 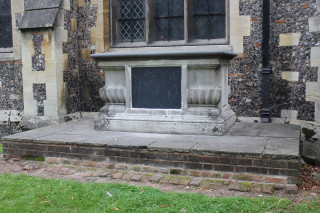 The Fig Tree Tomb was a popular tourist attraction in Victoria times. Legend claims that the person buried there was an atheist. They had asked that something be buried in the tomb with them when they died that if God did exist could germinate as proof.  The existence of God was proved by a fig tree that grew up from the tomb, dislodging the lid. This strange sight drew visitors to the graveyard to hear the story and take a twig as a souvenir. There certainly was a fig tree growing from the tomb, right up until the early 1960s.This has now gone, but the tomb and the legend remains. There are several versions of this story, but one says it was a Naval Officer buried here named Ben Wangford. However, the slate panel carrying the tomb inscriptions would have eroded away long ago and the lack of any names or information on the tomb would have only fuelled the legend at the time.

However, it has not been possible to identify anyone of the name Wangford through naval records and the growth of the fig tree has been put down to the vicar’s preference for eating figs as he walked to church, spitting the pips out as he went. It is also unlikely that an atheist would have occupied such an impressive tomb, so close to the church.

Whoever was buried here must have come from a wealthy family as the tomb is of Portland stone and quite an elaborate design. The choice of slate for the inscription panels would have been down to it providing an extremely crisp carving when installed, but this would have delaminated and worn away relatively quickly.