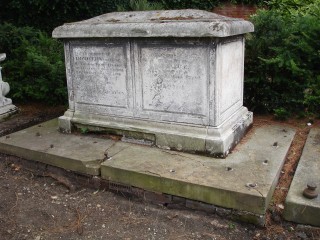 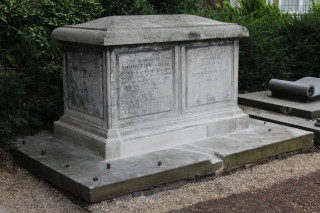 This tomb was ignored or perhaps not visible when English Heritage first made recommendations on which buildings and other structures should be listed in Watford. But it is however a very significant tomb as several generations of the Dyson family have lived in Watford.

The John Dyson, buried here, came from a family of maltsters and brewers who had been producing beer in the town from at least 1751. He bought a fine brick house in the Lower High Street in 1812 because he saw the potential in the site. He built a new brewhouse behind and a successful business grew, which was eventually passed onto his son, also named John. This John died in 1867 and is also buried here. On his death the brewing site was bought by Joseph Benskin and became the Benskins Brewery. The original house still stands and since 1981 has been the home of Watford Museum.

The other Dysons also buried here are from another branch of the family who farmed at Tolpits in West Watford.