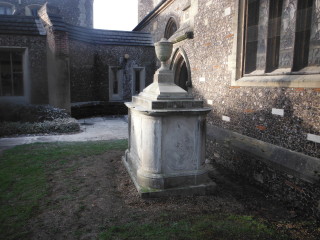 The only Fawcett traced in local directories is described as an Apothecary. This would have been the equivalent to a dispensing chemist, but would also have been much in demand for all kinds of medical advice and treatments as there were no doctors in the town at the time.

There are 7 people commemorated on this tomb. Mr John Fawcett, who is described as ‘late of this town’, was buried in 1799 and his wife Mary followed him in 1802. However this tomb was likely erected at a later date, as it is described as being in memory of their daughter Ann and 3 of her children. Ann married Thomas Lavin, two of their sons, Thomas and Henry died as infants and the eldest Fawcett James, died aged 29.

It is thought Thomas Lavin came from a family of Tanners of that name known to have been in Watford at the time. Both he and the Fawcetts would have been important, successful tradesmen to have a memorial of this size and detail.

The stone finial from the top of this tomb was found in nearby undergrowth during the project, in 2 pieces. It has been restored and now re-instated.