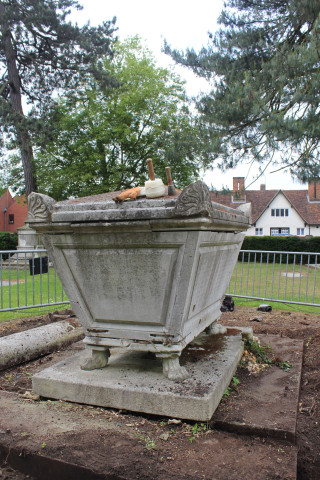 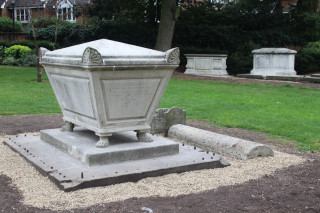 It was this beautiful monument that first inspired the tombs restoration project and subsequent application to HLF for funding. In 2007 it was so surrounded by undergrowth that it was not possible to see the inscriptions. When the plants were removed it became clear that the tomb was damaged; the iron bars that had been inserted through the tomb to hold the sides together had rusted and this expansion had caused the stone panels to crack, they were at real risk of collapse. Now fully restored we can see that compared with the other chest tombs in the churchyard it is an unusual casket shape and notably stands clear of its plinth on 4 clawed feet.

Buried below this monument are Christopher Dalton Esquire ‘of this town’, who died in 1852. He is buried with his wife Elizabeth who had died giving birth to a stillborn son in 1832. Elizabeth was the daughter of John Guest of the City of London, ‘a highly respected citizen’. He and his wife, also named Elizabeth are buried here also. It is thought that they perhaps retired from the city to Watford to be near their only child. Sadly John died of Cholera 3 months after the death of his daughter, but his wife lived until she was 71.

Records show that there was a Miller named Christopher Dalton living and working in Watford in 1832. This may be the one buried here, but it is more likely to be his son who would have climbed the social ladder through marrying the daughter of someone from London and therefore have been able to afford such an elaborate burial tomb.