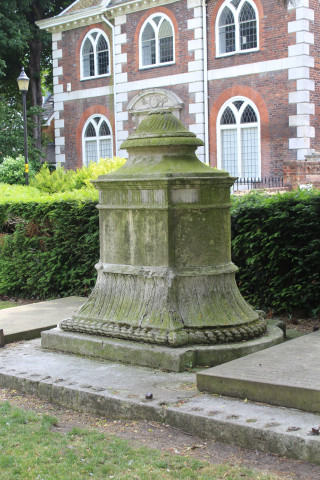 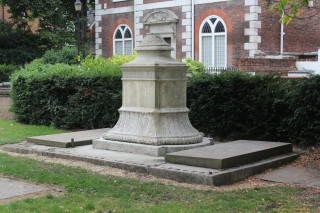 This is perhaps the grandest of all the tombs, even without the finial that would have original stood on top. The main inscription is significant as it tells us that Thomas Clutterbuck erected this monument in memory of his ‘ virtuous and beloved wife’, Sarah, who had left him with 12 children to care for. He describes the children in the tomb inscription as ‘Twelve pledges of their mutual affection’.

Four of the ’12 pledges’ are buried here, under a slab to the side of the tomb. John, who died aged 12, William who was 23 when he died and two sisters Elizabeth, 27 and Sarah, 29. Another son, Robert the Elder who lived at Watford House, wrote a “History of Hertfordshire”.

Research into the Clutterbuck family tree has shown that the children were born between 1771 and 1786, Sarah died in 1788. Death was ever present in Victorian life, for the well-off as well as the poor and some of the sad inscriptions here reflect this. The first Clutterbuck we know of in Watford was Thomas the Elder who came to Watford from Gloucestershire to work as a land agent for the Earl of Essex. He and his wife, Jemma are buried also here.