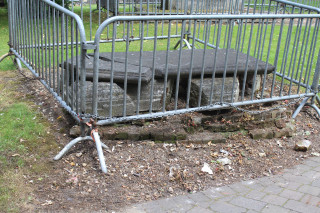 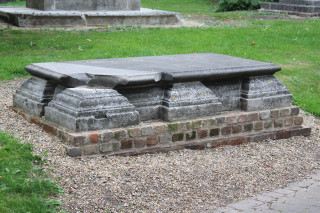 Photographic evidence indicates that this tomb was vandalized in the late 1970s and that it was possibly then that the side panels were removed. What remained seems to have been put back together at about the time the new church centre was opened in 1979, but subsequently fell into a bad state of repair again. It remained a pile of stones by the footpath for a number of years, but as a result of the restoration project has been rebuilt using all the surviving stones. Part of the inscription on the top slab is just legible and tells us that it was erected in memory of William Firth, about whom nothing is known, as there are no entries under that name in any of the Watford directories of the time.