A History of Watford's Diversity

From the 18th century to recent times 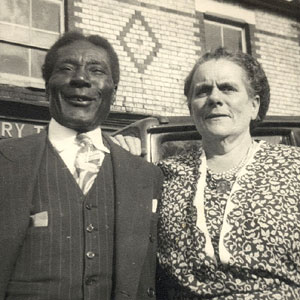 The story of diversity in Watford dates back to when it was still a sleepy market town in the the eighteenth century. At this time, there was a great expansion in Britain’s black population. Plantation owners were returning to England, bringing back their personal slaves, and some of these were set to work as servants in English stately homes such as Cassiobury. The lives of these first black residents of Watford can be traced in paintings, gravestones and parish records.

Watford changed beyond recognition in the nineteenth century. The opening of the railway in 1837 led to a massive influx of new residents. By the end of the Victorian period, Watford was already established as a commuter town. Watford Football Club was formed around this time, and in 1898 the Cother brothers became the first in a long tradition of black players.

In the 1930s, when the Buxton brothers were growing up to become famous boxers in the town, Allan Buxton recalls that they were the ‘only dark skinned family in Watford’.  However, in the post-war years, Watford acquired a rich and diverse set of communities. This website features stories of arrival, including the mesmerising first person accounts of Caribbean women arriving to the cold and racism of 1950s England, and an account of the hard-working lives of Poonam White’s parents, who moved here from India in the 1960s.