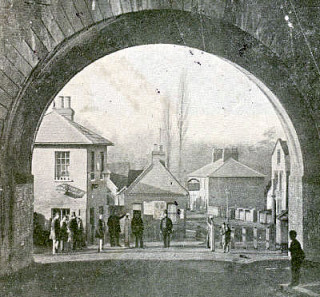 The toll house at the turnpike on Lower High Street, Watford

The Abbot of St. Albans may have chosen Watford for his new market because it is believed that the site lay on an old trackway from London to the West Midlands. The ford over the river Colne to the south of the market place, which gave Watford its name, often caused problems to travellers. The state of the unmade road, which was dusty in summer and muddy in winter, was frequently commented on.

In the sixteenth century the maintenance of the road became the responsibility of the parish.  In the eighteenth century turnpike roads were introduced. The Sparrows Herne Turnpike Trust from Bushey Heath to Aylesbury and the Hatfield to Reading Trust crossed in Watford and toll gates were erected where travellers had to pay to use the road.

In 1850 the toll gate at Bushey Arches (now opposite the Wickes Store) charged 6d for a horse and 3d for a man on horseback.  There were other toll gates in Hempstead Road, St. Albans Road and Rickmansworth Road.

The battle against congestion

By the 1920s the expanding town needed improved road facilities and the Watford By-Pass (A41) and what is now the A405 had provided some relief.

But by 1962, traffic congestion around the High Street was becoming intolerable and a one-way system was introduced.  Later, in 1972, a fly-over was constructed over the Parade as part of the ring road system. With the opening of the Harlequin Centre in 1990, a link road to the M25 and M1 made it even easier to reach Watford.