Shops that I can remember 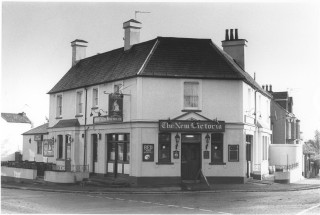 Queens Road had a variety of shops: there was Boots which had a corner position, Beale’s a ladies shop, I believe a member of the Beale family was a Watford Councillor, Cullen’s the grocers, who had an unusual method of receiving payment, you would hand your money to the shop assistant, who would place it in a container, and attach it to a conveyance, which acted like a catapult, after a cord was pulled, and then released, the container would be conveyed along a sloping stretched cable at speed to a cashier sitting high up in a kiosk, the cashier would then deal with the payment, and return the container back down the slope, which now contained your change, and receipt.

Further along the road was a Water Trough for Horses, and there was a factory that made tape recorders, I believe it was called ‘Walthams’ . Queens Road continued on towards Woodford Road at Watford Junction.