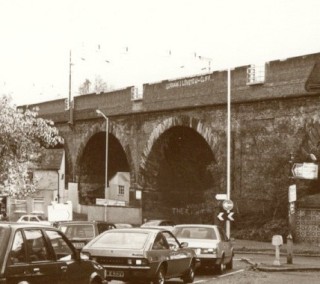 We referred to Watford High Street as two different areas: on leaving the High Street Station, we would identify the road to the right of the station as ‘Lower High Street’, and to the left, ‘Upper High Street’.

Lower High street started from Bushey Arches by one of the entrances to Oxhey Park, next to which was the ‘Wheatsheef’ pub.  My memory starts from approximately 1941/2. There being many pubs in the High Street, I will not be referring to them in this section.

Proceeding up the High Sreet, I can remember, and smell the Gas Works with their large gasometers, you could purchase coke very cheaply from the Gas Company, and you would see people with there sacks, barrows, and boxes on pushchairs, collecting coke. You could also purchase creosote in the same way, the difference being that you had to take an empty can for filling.

Opposite the gas works was the London Green Bus Garage (Part of London Transport). These buses served Watford and the surrounding areas, the few red buses that were garaged their, were buses that operated between London & Watford Junction.

Next to the Bus Garage was George Ausden the scrap merchant, though they collected all types of scrap, metal appeared to be the most popular, as you could see piles of it from the road. At this point I should mention that this area was noted for flooding.

Further along was the Town Mission in Local Board Road (Now called The Pump House), I can remember carrying a wooden chair from their to Watford Field School, I was a pupil there at the time, our Headmaster Mr Coleman arranged to borrow the chairs from the Mission, for a sports function on the playing field, and I was amongst a group of boys sent to collect them.

Another popular shop was Tividale Tools, noted for its large variety of tools. Then there was Fox Alley, a footpath (or perhaps at some time a cobbled road) between some very old cottages, which led to Watford Fields. Apart from the school, there was a Water Works, which belonged to Colne Valley Water Company.

There was Wren’s the Saddlery & Leather shop, Benskins Brewery & James, who marketed the Grain for Benskins, and then Weston’s the fish & chip shop. New Road opposite the station was noted for a green roofed house, and Gibson’s abattoir.

I will end with Bushey Arches. Can anyone remember Luckett’s the Taxi Co. being situated under the second arch, and where did they go, after they were removed to enable a military concrete reinforced bunker to be built on their site.

I will now endeavour to refresh my memory about the Upper High Street !