To England for the first time

Soon after Iris Lusack's 18th birthday, her family decided that she should leave Sierra Leone for England. 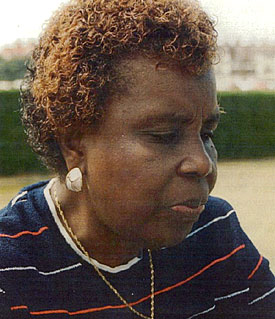 These memories come from a book called ‘Our Legacy in our own Words’, which was created and published by the Women of Watford Caribbean Elders project.

I had just celebrated my 18th birthday. The next day I was told to visit a tailor for measurement for a suit that was going to be sewn for a cousin of mine in London.

A week after this we had a family gathering, my grandmother who I was staying with, aunty, mother, uncle and father (now deceased) were all there. I was then summoned to attend the meeting. I started to panic. What have I done wrong this time, I thought. As a spokesperson for the younger members of the family being summoned to a meeting was nothing strange; but somehow this one was different. I didn’t know how, I only knew it was different. At this meeting I was told that I would be travelling to England with my godmother and favourite aunty to join my cousins. I was shocked.

That was a surprise; a pleasant surprise but I was not too happy. I needed time to think. Decisions were made for me. I had no option. My life path was decided for me. At that time there was a mad rush to go to England, but I did not see myself as part of that madness.

We left on the 20th July by M.V. Accra, a big liner. We arrived two weeks later at Liverpool Docks. From there we boarded a train to Euston Station. I noticed all the houses with smoke coming from the chimneys. I was not sure where we were. I asked my aunt where we were and she said we were in Liverpool in England. I could not believe what I was seeing. It was damp, grey, cold and miserable. I could see then why we had to dress the way we were with boots, hats, woollen gloves and a big heavy coat. My eyes and nose were streaming with water.

When we arrived at the station in London, my cousins were there to welcome us, hugs and kisses all round.  We then drove to a house in Tooting Common.  There was a big fireplace with logs and coal burning.  I was shocked to see fire burning inside the house.  Back home fires were lit outside to cook.  This gave me nightmares for many nights. It was cold and I could never keep warm even though I was wearing a lot of clothing.

The next day there were trips to register with the doctor, then shopping for suitable clothes for the winter. When we got home I was very hungry. We had our meal and went to bed. To get some warmth in be I slept with several layers of blankets and a hot water bottle.

In September we had to travel to BrightonCollege where I was enrolled for a year to do school meals course. I had an interview. My aunt came with me. We were taken to my room, which was very cosy. The following morning I had to go to a school where I had work with the supervisor and dinner ladies. I had a placement at the schools for a month, then to central kitchens where the meals were prepared and transported to schools that had no kitchens. It was hard work but very interesting.

As a Methodist I liked to attend church on Sundays, this reminded me of home. I made lots of friends in the church. The hospitality from some of the people and colleagues was good. The hostel where I lived was on the seafront. I had a front room with a lovely view of the sea. This made me think of home especially on the weekends when the beaches were full of people form London and other towns.

I found the course very hard because of the short time involved, although it was very interesting. At the end of the course my work was assessed and I was given a certificate, of which I was very proud. My relatives back home were very happy too.

At the end of the year I went to London to join my cousins. We went out for a celebration meal, which we all enjoyed. I loved going shopping. I got a job working in Harrods, in the silver buffet section making a variety of sandwiches for different customers. Though it was hard work I enjoyed it. I was loved not only by the customers but also the chefs and managers. I was living in Shepherds Bush, sharing a flat with two of my cousins. This job was to get money to pay my rent, have some pocket money for my keeps, but mainly to get some experience of working life in England. I was fortunate to be born into an elite family. Most of my cousins were sent to England to continue their education, as an English certificate enhanced your job promotion back home and is therefore prestigious.

I worked for a year and then went back home to Sierra Leone. It was nice to go home because I disliked not seeing my mother, cousins and friends. I really missed them especially my darling aunty, grand-ma, all of my relatives, sisters, brothers, aunts and uncle. I also missed the sunshine, beaches and fun, basically I missed Sierra Leone.

I got a job at the school I attended as a child. This was to start the school meals project for the pupils attending the school.

It was a secondary school for girls, which was named ‘The Freetown Secondary School for Girls’ (FSSG) at that time. This was a school founded by some Sierra-Leoneans. My favourite godmother and aunt were the principals and my uncle one of the founder members and director.

There were two cooks, dinner ladies and an assistant working with me. I bought local provisions and the meals were healthy, palatable and good. After a few years of working on this project I was asked to do some teaching. I tried this for three years then I left again for England in the fifties.

I left on board M.V. Aureol. We arrived at Hull then took a train to London where I was met by a girl friend with whom I later shared a flat. I was lucky because suitable or nice accommodation was not easy to access. It was during the time when you phoned for a flat to let or see a notice saying ‘flat to let’ the notice also read, ‘No blacks, No dogs and No Irish’. I found this very humiliating, not in the least inhospitable.

This was shocking and unacceptable. I felt this was supposed to be a Christian country; a country we looked up to and were proud to be visiting.

Shortly afterwards I returned to Sierra Leone but came back to England. A few years later I got married, had two boys and settled with my husband in Watford. We have lived in Watford for 30 years. I worked in the Inner London Magistrate Court for 25 years as a civil servant.

When I retired I got heavily involved in community development work. This I enjoyed and still enjoy very much. I find it very rewarding especially when you see changes in the community in which I’ve had an input. It is also satisfying to be recognised and rewarded for the work done.

I have been awarded the Certificate and Special Achievement Award by the Watford African Caribbean Association and the Watford Borough Council respectively. I have also received another award from the Millennium Youths – an award for my work and dedication to the community of Watford. This award has been sponsored by the Jamaica National Building Society. These awards take a special place in my home. Whenever I am dusting and I look at them on my mantelpiece, I feel good.

My thanks to all who have helped and supported me all through the years.

No man is an island.