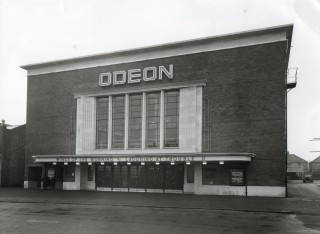 Watford has a large amount of activities that you can choose for your leisure time.

‘Strictly ballroom’ at the Town Hall

Watford had a good selection of Dancing Schools, Star, Oakley, Peggy Shilling, that you could use, to prepare you for the Saturday Dances at ‘The Town Hall’, at one time very popular, and was always so crowded, that you were not allowed to jive, strictly ‘Ballroom’.

Girls and boys would congregate in separate groups, and when an easy dance like a waltz was announced, there would be a stampede towards the girls for a partner. If you were able to Foxtrot, Quickstep, or do Latin American, you had a better chance of getting a partner. Boys always outnumbered girls most Saturdays (ladies – excuse me!). It could be nail biting, as you always hoped that you had caught the eye of someone who liked you.

The ‘Town Hall’ was also popular for concerts, Boxing, and wrestling. The Hall is now called the ‘Watford Colosseum’.

A good selection of cinemas

The Big Bands sold out

From the Palace Theatre to the Oceana

Watford has also been very lucky to have its own ‘Palace Theatre’ which we all hope will continue to be well supported.

To-day we have new modern clubs like ‘Oceana’ etc., who provide entertainment for a new generation. Whereas we had to plan our leisure to meet last trains or buses, which terminated after midnight, the new generation are, however, are just arriving for their entertainment, knowing there will be taxis, late transport, probably Mum & Dad on late call.