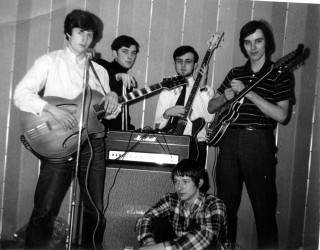 Part of Watford music scene in the sixties when many of the top groups came to play on Friday or Saturday night at the Watford Trade Union Hall or during annual Rag week at The West Herts College.

The TRACK were a local band who played gigs in and around Watford from 1964 -1967 and played support group to several chart topping bands of the period including The Moody Blues, Unit 4+2 and The Roulettes (Adam Faith’s backing group). The Track was forced to reduce the amount of gigs played after the group’s Bedford van  (insured third party only) was written off by the lead singer when driving down a  Welsh mountain side.

Richard Jordan’s father Walter (Wally Jordan) was one of the four founding members of the   Watford Harriers C.1924.