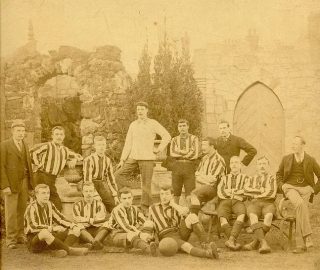 The accepted date for the founding of what became Watford FC is 1881.  That was the year in which Henry Grover and his teenage friends formed Watford Rovers and began their kickabouts in Cassiobury Park.  They moved into Cassio Road in 1890, subsequently changing the club’s name to West Herts, and joined the Southern League Division 2 in 1896.  In 1897 the club turned professional, and in 1898 joined forces with local rivals Watford St Marys, at which point the club name of Watford was adopted.

After a promotion and a relegation, in 1903 Ralph Thorpe assumed the role of benefactor.  Footballing great John Goodall was hired as manager, and promotion in 1904 led to more permanent status in Southern League Division 1, where Watford competed with most of the major clubs of the south of England.  Under Goodall’s successor Harry Kent, Watford won the Southern League in 1915.

After the Great War, in 1920 the Football League expanded and adopted the Southern League clubs including Watford as Division 3 South.

Watford moved into their new ground at Vicarage Road in 1922, but experienced fluctuating fortunes.  Money was usually short, and there were major financial crises in the late 1920s and the 1950s.  Second division football was the goal, but the closest Watford came was fourth place – at a time when only one club was promoted annually.  Twice, in 1927 and 1951, Watford finished in the bottom two and were obliged to apply for re-election to the Football League as was the custom at the time.

The troubles of the 1950s led to a ‘fresh start’ in 1959.  As a symbol of this, the club’s colours were changed to gold and black, and the nickname to ‘the Hornets’.  This time, things began to improve.